Hydrogen is the most abundant element of the universe. It is in outer space, the earth’s atmosphere, and even our own bodies. But on Earth, it is naturally bonded to other elements. We can turn hydrogen into electricity through combustion or electrolysis. In steam methane reforming, heat and a catalyst combust feedstocks such as natural gas or biogas, which reacts with water and produces hydrogen and carbon. Combined with carbon capture and storage, this pathway can decarbonize the energy process. In electrolysis, an electric current generated by renewable resources, such as wind or solar, separates water into hydrogen and oxygen. After hydrogen is produced, it then “stores” the energy for future use or is transported to a destination. 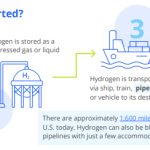 Once hydrogen is ready to be turned into energy, a fuel cell converts stored hydrogen into electricity. In a fuel cell, hydrogen combines with oxygen to generate heat, electricity, and water. With water as the only byproduct, fuel cells are clean, reliable, and efficient. And they are quiet: fuel cell passenger vehicles and municipal buses are about as loud as a refrigerator. 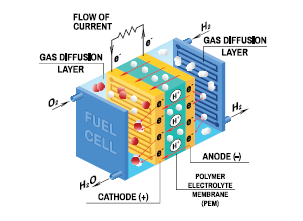 What can hydrogen be used for?

Transportation: After hydrogen is converted to electricity, it can be used to power zero-emission vehicles, including cars, trucks, buses, boats, warehouse fleets, and in the future, trains and airplanes. And for decades, almost all space travel has been powered by fuel cells and hydrogen. Hydrogen-powered heavy-duty trucks can refuel in less than 10 minutes, and passenger vehicles need only 5 minutes to refuel. There are already thousands of hydrogen fuel cell vehicles on the road around the world and, in the U.S., over 30,000 forklifts and other material handling equipment powered by fuel cells operating in warehouses for Amazon, BMW, Walmart and others.

Power: Hydrogen fuel cells can provide reliable back up power for banks, data centers, hospitals, and other essential facilities that must maintain uninterrupted service even through power outages. Many of these back-up power fuel cells are replacing diesel generators, allowing companies to reduce their emissions profiles and, in the case of hospitals, ensuring that patients breathe cleaner air and don’t have to worry about power black outs.

Industrial Processes: Hydrogen is the only zero-emission technology capable of producing the extreme heat necessary to produce energy-intensive industrial materials such as cement, steel, and glass. In fact, hydrogen has already been used for decades in gasoline refining, food processing, manufacturing, fertilizer production, and pharmaceuticals.

An odorless, non-toxic element, hydrogen can be produced from easily accessible resources all over the country, transported to its destination and converted into zero-emission energy when and where needed.

A bill in the [Washington State] Legislature that would expand the ability of public utilities to produce, sell...