Hydrogen is an energy carrier that can store energy after it is produced until it is ready for use as electricity or heat. Due to this unique storage characteristic, deploying hydrogen technology at power plants or as back-up power contributes to grid resiliency. Hydrogen produced with renewable energy allows intermittent energy sources like wind and solar to supply energy even when the sun isn’t shining or the wind isn’t blowing. And hydrogen fuel cell systems can power their own microgrids, bringing energy wherever it is needed with zero emissions at point of use.

Let’s take a deeper look at how hydrogen can contribute to grid resilience through large-scale industrial power generation and back-up power.

In large-scale power generation, hydrogen can act as a storage mechanism for power that is not needed immediately by the grid. After being produced through electrolysis or steam-methane reforming with carbon capture technology, hydrogen can be stored in salt caverns or in high-pressure tanks. This excess power can then be converted to electricity when demand is high or when generation is offline or otherwise compromised due to maintenance, storms, fire hazards, or other limiting events. In practice, this means utilities can prevent blackouts caused by plant and grid problems with the help of ample supplies of hydrogen.

DID YOU KNOW? Hydrogen’s storage capabilities can solve intermittency and supply fluctuation problems associated with solar and wind power. Hydrogen storage is being deployed and planned at renewable power plants around the world – from the EU to Saudi Arabia and even Florida.

DEEP DIVE: Hydrogen can be stored in existing geologic features like salt caverns, expanding the potential for longer term use during variations in energy consumption and demand. There are four existing hydrogen salt cave storage sites active in the U.S. today in states like Utah, along with many more sites identified across the country. South of Salt Lake City, the Advanced Clean Energy Storage project and Intermountain Power Project are converting a coal-fired plant to one that will eventually operate on clean hydrogen. The project also includes salt cavern storage capable of powering 150,000 households for one year in its first phase.

Hydrogen fuel cells can provide emergency back-up power, replacing diesel generators and providing reliable heat or electricity with zero emissions at point of use. In fact, hydrogen fuel cell back-up systems are already being tested and used across the country at critical infrastructure sites that need access to power at all times – places like data centers, hospitals, and telecommunications hubs. Because hydrogen back-up systems are also portable, they can power isolated microgrids for disaster relief, bringing much-needed power to areas that are remote or are otherwise not accessible to the wider grid. Furthermore, hydrogen fuel cell back up systems have twice the life expectancy of batteries, and their performance does not diminish if their charge is drawn too often. 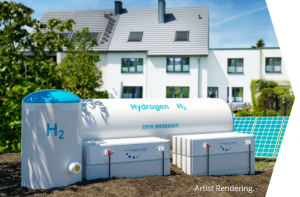 Hydrogen can add to grid resiliency by providing storage capacity, unlocking reliable energy during times of high demand or inclement weather, and through emission-free back-up power generation for critical infrastructure.

The primary purpose of the hydrogen hub workgroup will be to develop projects eligible for funding under the...

Hydrogen Hub Developments Across the U.S.

With 2022 upon us, states across the U.S. are kicking off their legislative sessions and governors are or...