How Hydrogen Can Decarbonize Manufacturing

Manufacturing processes create products that are ubiquitous to everyday life and are all around us – from buildings, to sidewalks, to food production – but they aren’t necessarily top-of-mind when people think of carbon impact. However, making these essential products has an outsized impact on greenhouse gas emissions. EIA data shows that the industrial sector is the largest energy user in the world, using 55% of energy produced.

What are the hard-to-abate sectors?

Reducing and eventually eliminating emissions from industrial, hard-to-abate sectors is essential to meeting net-zero emissions goals. These sectors include heavy industry, such as steel, chemicals, and cement, and heavy duty transportation. The hard-to-abate industrial sectors have higher costs associated with lowering carbon emissions compared to the rest of the economy, and the manufacturing process for these materials requires very high heat that currently relies mostly on fossil fuel sources. But hydrogen’s unique energy properties and heat capabilities means it can, combined with energy efficiency and circular economy practices, among other methods, unlock deep decarbonization for essential industrial processes.

How important is heavy industry?

These processes produce some of the most important building blocks for the global economy. Heavy industry sources emit approximately 10.3 gigatons of CO2 – about a third of all emissions from the industrial and energy systems. Even with zero emission cars and 100% clean energy power grids, we will not meet net-zero emission goals if we leave the manufacturing sector behind. And with global population and urbanization expected to continue accelerating, demand for food, fertilizer, infrastructure, and building materials will only continue to rise, making decarbonization strategies more important than ever. 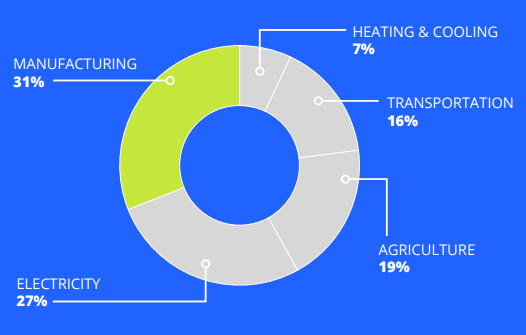 How can hydrogen help?

Here are some examples of industrial processes that hydrogen can help decarbonize.

Cement: Cement is a key ingredient that combines with water and sand under very high temperatures to make concrete, which paves our sidewalks and roads and is the literal foundation for many buildings and structures. CO2 is a natural byproduct of cement production, which usually entails burning fossil fuels to heat a kiln to 1450°C, and four billion metric tons of cement are produced annually – amounting to 8% of global carbon emissions. Replacing fossil fuels with lower-carbon hydrogen would cut down on carbon emissions; some type of carbon capture would also be required to capture the carbon that is naturally produced in this process. Projects under development around the world in Europe and North America are pairing carbon capture and renewable hydrogen to decarbonize cement production.

Steel: Steel is one of the world’s most energy-intensive industries, responsible for 7-9% of emissions. It is also irreplaceable in the global economy as the world’s most commonly used metal, and is in just about everything, from cars to buildings to bridges to washing machines. Steel is  usually made by extracting iron from coke, a kind of coal, in a 1,200°C blast furnace through a chemical reaction with oxygen that produces CO2. A process called direct reduction (DRI) involves producing steel differently, removing the oxygen during the blast furnace process, and halves the  emissions. DRI accounts for 5% of new steel production worldwide. Further altering this process by using 100% hydrogen, instead of fossil fuels, could even further decarbonize this process. For example, a Swedish project has been exploring zero-carbon steelmaking using hydrogen made from hydropower since 2016. This project alone is expected to reduce Sweden’s total annual carbon emissions by 10%.

Ammonia: Producing chemicals is an energy-intensive process that is not easily decarbonized: let’s take a closer look at ammonia, which accounts for almost 1/5 of total reported emissions from the chemicals sector and is the second-most commonly produced chemical in the world. Ammonia is very important for food production, water purification, and cleaning solutions – and could even be used as shipping fuel. Half of the world’s food production relies on fertilizer made from ammonia. But the Haber-Bosch process, which converts hydrogen and nitrogen to ammonia, requires temperatures of more than 500°C, is almost completely reliant upon fossil fuels, and is so energy-intensive that it takes up 1% of the world’s total energy production and emits over 450 million tons of CO2 – emitting more carbon annually than any other chemical production process. As scientists experiment with processes that require less energy than Haber-Bosch, producing hydrogen through renewable resources or paired with  carbon capture and storage (CCS) could significantly decarbonize the ammonia production process. 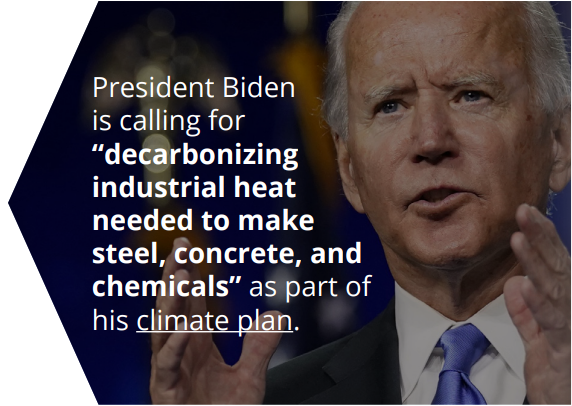 Decarbonizing heavy industry with hydrogen can strengthen the economy

Supporting the hydrogen industry today will help build a strong industrial base and supply chains to retain and create millions of good-paying jobs in hydrogen-related manufacturing and technology in the U.S. The cost of producing low-carbon hydrogen is falling, and implementing hydrogen solutions in hard-to-abate industries is becoming increasingly viable. In fact, according to a study by The Energy Transitions Commission, completely decarbonizing the global economy by 2050 – including these hard-to-abate industries – is possible at a cost of less than 0.5% of global GDP.

Hydrogen is currently the only zero-emission technology capable of producing the extreme heat necessary for the production of the industrial materials we need for the global economy to function. Investment into hydrogen solutions for heavy industry now will put us on the most sustainable path to meeting our 2050 climate goals.

The primary purpose of the hydrogen hub workgroup will be to develop projects eligible for funding under the...

Hydrogen Hub Developments Across the U.S.

With 2022 upon us, states across the U.S. are kicking off their legislative sessions and governors are or...